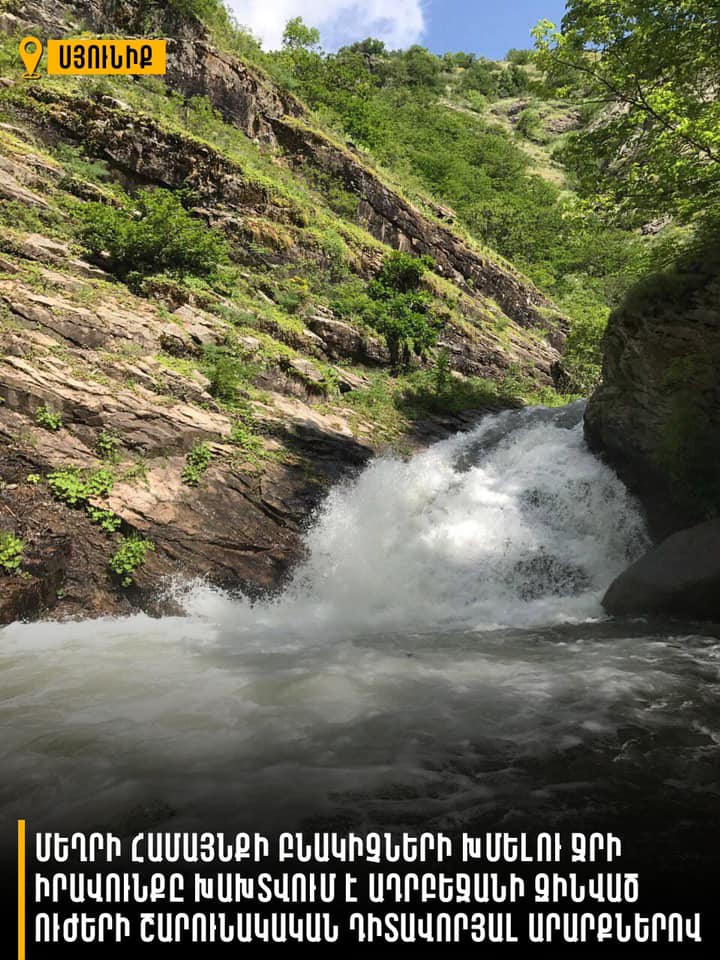 The internationally guaranteed right of water for the residents of Meghri community of Syunik marz of the Republic of Armenia is continuously seriously violated by the deliberate actions of the Azerbaijani armed forces.

The Human Rights Defender of Armenia has received alarming and disturbing alarms from the residents of Meghri community that about 5 years ago the Azerbaijani Armed Forces changed the riverbed fed by the Zvaraget tributary of the Meghri River to Nakhichevan (Ordubad region).

As a result, in Meghri-Agarak towns of Syunik region, as well as in Nrnadzor, Shvanidzor, Alvank villages, serious problems arise due to the availability of drinking and irrigation water. The majority of the population of Meghri community is in these settlements

The Defender of the Meghri community, as well as the delegation led by the Human Rights Defender, received the necessary information regarding these issues from the Defender during a visit in January.

The issue is that the drinking and irrigation water of the settlements of Meghri community has always been provided at the expense and provisions of "Meghri" river. "Zvaraget" or "Ayrijur" tributary starts about 3,500 meters above the sea level. It rises from the South-Eastern slopes of the Zangezur Mountains and then joins the Meghri main river. Due to the snowmelt, Zvaraget has been flooded since August of each year, due to which the full supply of drinking and irrigation water has always been ensured for the mentioned settlements of Meghri community. Without it, the Meghri River provides water only from the beginning of each year from June to July, and then the Meghri becomes very scarce, and in the part of Meghri City, the river is generally dry. Thus, by way of this, serious damage has already been done to the environment of the Meghri community.

Residents and the Head of the Meghri community informed the Human Rights Defender that every month the Azerbaijani military creates brakes with special engineering equipment and thus changes the course of the tributary to Nakhichevan.

In other words, as a result of these deliberate actions of the Azerbaijani armed forces, serious problems have arisen every year beginning in August for the residents of Meghri, Agarak, Nrnadzor, Shvanidzor, and Alvank villages due to the unavailability of drinking and irrigation water.

At the same time, all of this is done with the threat of a real dangerous risk to human life, as the section of the "Zvaraget" tributary of the "Meghri" river is under the direct target of the Azerbaijani military and is controlled by them.

These actions of the Azerbaijani Armed Forces and, in other words, by those in positions of power, are grossly violating the rights to water, which is vital for the residents of the Meghri community of Armenia and is guaranteed absolutely by international norms.

The right to water is guaranteed internationally. This right includes the human right to have sufficient water for both continuous drinking and domestic use (irrigation, hygiene, etc.). At the same time, there must be not only a safe access to water, but also a full access to water. This right has a unique value and is at the heart of other human rights to life, health, dignity and privacy.

This right is so fundamental that the United Nations has declared the right to water and sanitation a global Sustainable Development Goal, taking into account the fundamental principles of water, irreplaceable importance for human development, and organization of life’s necessities. The UN Secretary-General described this right as a goal of the Millennium Development Goal.

The described actions of the Azerbaijani Armed Forces grossly violate the Convention on the Transboundary Watercourses, the Use and Protection of International Lakes as adopted in Helsinki on March 17, 1992, and other international instruments.

The Human Rights Defender's Office of Armenia is currently summarizing the internationally absolutely and unequivocally guaranteed rights of the people of Armenia to drinking and irrigation water and the infringement upon these rights by the Azerbaijani Armed Forces.