The draft of amendments to the Judicial Code and the law on the Constitutional Court are problematic: The Human Rights Defender of Armenia 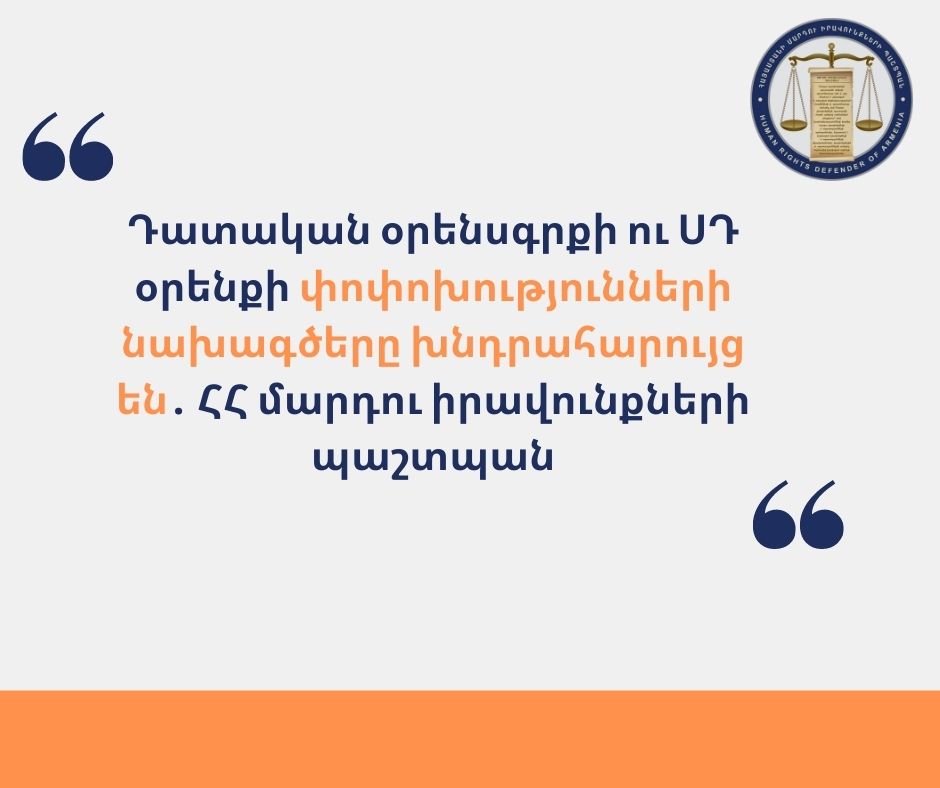 The drafts, in particular, envisage that a member of the Supreme Judicial Council, a judge, and a judge of the Constitutional Court should be considered in violation of the incompatibility requirements, which is the basis for the termination of the powers, when they have committed a deliberate violation of a fundamental human right by a decision by an international court or other international instance, the Republic of Armenia (...).

According to the Office of the Human Rights Defender, these legislative arrangements are problematic: Among other reasons, the proposed draft solutions deviate from the essence of the incompatibility requirements of the judge. These requirements are not envisaged by the Judicial Code, according to which a judge may not hold a position in state or local self-governing bodies that is not conditioned by their status, any position in commercial organizations, engage in entrepreneurial activity, perform other paid work, except for scientific, educational and creative work. In other words, the incompatibility requirements of a judge's activity are inherent barriers to engaging in activities other than the judge's professional activity. In this regard, it should be noted that envisages a set of incompatibility requirements, which refers to the prohibition of a judge to engage in activities other than their professional activity, is also in line with the international legal approaches.

The next issues of concern regarding the settlement proposed by the draft solutions refers to the "deliberate" nature of the violation registered by the decision of an international court or other international instance where the Republic of Armenia was a party.

The issue of termination of the powers of a judge, a member of the Supreme Judicial Council, and a judge of the Constitutional Court shall be resolved by the Supreme Judicial Council, and the Constitutional Court, respectively. Thus, the violation should be qualified as "intentional" by those bodies, which raises a number of unresolved issues (for example, what are the procedures and the criteria followed the Supreme Judicial Council and the Constitutional Court to qualify the violations as intentional? In case of violation of a fundamental human right, which of the judges who examined the case which has been through the courts of three instances of Armenia will have their powers terminated on the grounds of violating the non-compliance requirements? How will the share of the fault of a judge in the registered violation be determined, including a case examined by a judicial staff collegially?

According to the draft solutions, the Supreme Judicial Council and the Constitutional Court have the right to make an assessment of the circumstances of the criminal case that need to be clarified, and to make decisions which have legal consequences, since the violation registered by the decision of an international court or other international instance where the Republic of Armenia was a party, is a crime envisaged by Article 352 of the Criminal Code of Armenia (an apparent unfair verdict, decision, or other judicial acts, which, however, is a circumstance subject to approval within the framework of criminal proceedings

Moreover, the regulation proposed by the drafts is in indirect contradiction with the regulation defined by Article 142(7) of the Constitutional Law the Judicial Code of Armenia, which prescribes that the reversal or modification of a judicial act is not in itself a ground for disciplining the judge who made that act. Hence, the new legislative solutions bypass the prohibitions already fixed by the Judicial Code, a situation which is inadmissible.

In addition to the above-mentioned, International standards and experience should have been presented in detail in the justifications for the adoption of the drafts, and the practical risks, and the possible negative consequences from the international point of view (What are the solutions to the issue of disciplining judges in foreign countries, what are their lessons or advantages?

Meanwhile, the current justifications are general in nature and superficial.

Therefore, the lack of justification to address the raised concerns calls into question the need for the draft solutions, and the legality of their goals.

Therefore, the Human Rights Defender has concluded that in the absence of justifications and without addressing the above-mentioned concerns, the proposed draft solutions are not acceptable.